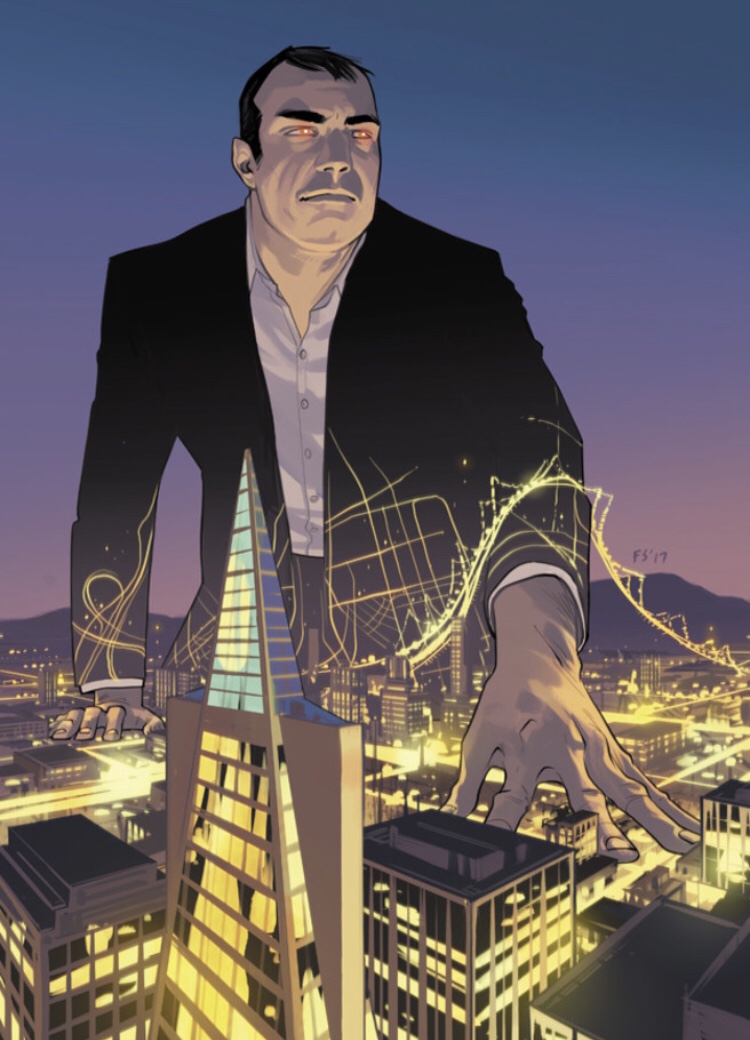 “Burning still, will you always, will I.”

“Now, always was, ever is, never will not be, Shamshael.”

The heat suffused him, and he breathed in the fire. All he was, was rid. He knew there was a body here, he knew he still had a body. Lips which had tasted others, had felt love and pain, every ounce of his sustenance through his life, opened, and he spoke: “Anokhi.”

He opened his eyes, and felt his form at the supine at the bottom of a hole. He saw the ground black and smoking around him, glowing red, the night sky above him. He slowly stood, and he beheld his hand. Black like onyx, shining in the waning moon. He looked down, and saw all his skin was now an iridescent stone in the night, sparkling like a black opal. His clothes had burnt away from him, but he was not bothered; his nudity felt natural, not vulnerable. He rose to the top of the hole, alighting on the ground to see the burning crater next to the bridge, which had once been his makeshift home. How had he risen?

Wings. He drew them forward so that he could see them. Black feathered, huge and shining, as they must be to bear him aloft, he thought. He walked to the edge of the river, and he adjusted his eyes until he saw his reflection on its surface. Still slightly smoking, he saw his eyes, burning red, and his polished gem-like skin. His body was gone, burnt to dust in the flames. His magnificent wings stretched above him and around him.

“Anokhi,” he whispered. “What are these? What have you made me?”

The voice came, like the whispering trees, but now from within him, from his heart. “Revealed you, have I. Not remade, but unveiled. Wings, covered in skin, now charred and gone, your truth. Aloft now, bear you.”

Shamshael looked to the sky, and the wings carried him a foot off the ground. There was scarcely any effort, and he rose further, now ten feet above the bridge. His heart raced at the newness, yet it felt as natural as breathing or walking.

“The world and distance soon will you understand as an illusion. Space, time, illusions all. Place and moment, one is all, am I, are you.”

He hovered in mid air, hundreds of feet above the ground. The winds did not fight him, but embraced him like their own. He wondered if birds felt the same. The voice continued:

“The ones in your life loved you did, hated you, now saw Shamshael, worship you, fear you, awe of you, kill you they would try, god make you, not would they see you true, understand you, know you. Illusion, all is. All except you and I, Anokhi.”

“What is this for? What am I supposed to do?”

“City. The city, shameful this city. Come, judge you this.”

He flew, following a signal that seemed to come from behind his nose, deep in his skull. The lights soon came, and he was amidst skyscrapers, power lines, suspension bridges. He stopped at the center of the city and felt buzzing wash over him.

“Electricity,” Anokhi whispered. “Pellets of fire, so tiny, through wires it is cast. You are fire. Breathe it in, and know the truth of these people. Know it all, as know I. Then judge. Measure and judge.”

The buzzing creeping along Shamshael’s new skin grew to a roar, and he accepted it, taking it, forcing himself to view and see everything. He grit his teeth, until finally he could bear no more, and he rocketed into the stratosphere, away from the maddening din.

“You see all that! You see everything! What am I supposed to do with that!?” He screamed into the night sky, flaming tears rushing down his face.

The vapors around him took form, a wraith; Anokhi put a tendril of smoke on his shoulder. “Heart of my hearts, so sorry am I. Say what you’ve seen, tell me, Anokhi.”

“I am a big ball of horrified right now! The kids! The kids! That’s what kills me Everywhere there were screams, maniacal laughter, the sobs of pain and grunts of ecstasy all around me. The human slaves, and what people sell themselves for, and the disgusting, the evil, I can’t take it all, I just want to …” he trailed off.

“Burn them all.” The words shocked Shamshael as they exited his mouth. He knew it was what he wanted.

“A garden I planted, now rotten. My gardener you will be?”

“No! I can’t kill anybody. There’s innocent kids there. You’re supposed to be able to know everything and do anything. Can’t you just fix this?”

“Those have I made which can be saved, and those I can’t, and didn’t make. Life would end, if I were to fix. Garden, for me, you garden. Choose for the city: the sword?”

A flaming sword appeared before him, and a vision of himself slaughtering men left and right, drenched in blood. He shuddered.

A vision of fire devouring everyone in the city appeared before him.

He saw the population drowned.

The most egregious torments replayed before him.

Shamshael sighed. “I can’t do nothing. There’s no chance of a guardian angel intervention, everyone gets better and ends up happy?”

“Damned rape saved. Who will save the saved? No hands have I save yours, Shamshael.”

He reached out his hand and took the flaming sword. “Let’s call it surgery.” He descended rapidly through the clouds.