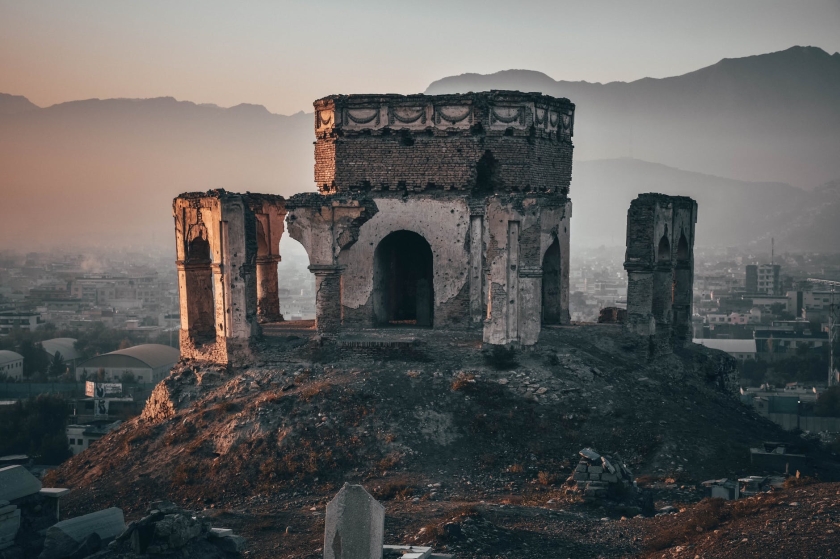 We drove on and on into the desert, the sun setting behind the Bacatete mountains. Jon had explained that we were going to see his friend Juan’s grandfather Orlando, who was a medicine man who lived in the desert, who could help get us started with finding Emperor Myra and Rex’s daughter, and unraveling the mysteries of Myra and Tyler’s assassinations. I was skeptical, but here for the ride. Finally we reached a post on the side of the road, and we pulled off into the dirt. We got out of the truck, where my footlocker with my rifle and pistols were locked. I walked up to the post, and saw it was a totem pole. “He lives around here?” Three paths stretched out in front of us.

“Yeah, this is the X’s totem.” He pointed to four faces carved in descending order. “Eagle, Ox, Lion, Angel. That’s how you know how to find them.” He started walking down the path to the East.

“You know this is the right one?”

“It’s the direction the Lion is roaring. Orlando’s the lion.”

“It’s not really a letter, it’s a rune. Gebo. Their sign means they walk between two worlds.”

About a half mile down the trail, we came to a shack set up on a bluff. A small, wrinkled man sat on a bench on the front porch, and when he saw us, he smiled the widest, toothless grin I’d ever seen. I felt warmer and happier than I’d been in a long time.

“Jon, it’s wonderful to see you,” he called out, standing and striding out to meet us. I saw that his frame was rugged and strong, despite the years told by his sun weathered face. They embraced; it was the first person I had ever seen Jon hug.

“I want you to meet Lita Oakley. She’s a firecracker. She’s a detective and a sharpshooter who works with me.” Orlando shook my hand, and kept hold, closing his eyes.

“You are kindness, but wrapped in a suit of armor, a steel jacket. You keep everyone at a distance, because you want to protect everyone, you want to keep all the hurt on you, if it must be there. You and Jon together are fitting, for he is judgment; the judge, jury, and executioner, the one who waits, and watches, and acts. If you could both turn back the clock and undo the wrongs done to you, you would, but if not, you’ll bring down the heavens so that justice can be done.”

I started to cry, which I never do. “How do you know us so well?” He took me in his arms and kissed my forehead; he smelled like rose pipe tobacco and the earth.

“Lita, you were meant to come here. Together we will find that for which you search. Please come in.”

We walked up the steps to the twilit cabin. Orlando started building a fire to feed us, and we drank well water. I asked Jon, “why’d I have to leave all my metal in my bag?”

“It’s an old magical practice. Iron keeps away the vibrations that Orlando picks up. It messes up his magnetism.”

Jon looked up at the ceiling and squinted. “This is hard for me to talk about … I had a religious experience. I’m all hooked in with the Anwynites now. They believe they get transmissions from this satellite named Barbelith that give them life sustaining, truth revealing information and allow them to communicate with each other.”

“Jon, you are the least spiritual person I’ve ever met. What did they do to you?”

“I was with this woman, June Loos, and she connected me with Barbelith, and I opened up, and I saw my sister, and she told me about how they killed her.”

“Oh my God, I knew your sister was gone, but I had no idea, I thought she had gotten sick or something.”

“Yeah, I never talked about it. But she went missing, I went nuts, and ended up in a psych hospital. Chester got me out and got me back on track in the Navy, and then gave me a job when I got out. It turns out him and Durcette and the Faceless were the ones that killed her in the first place.” His mouth was set, grim and determined, but his eyes shimmered with tears. I put my hand on his, and Orlando brought us bowls of soup, steaming hot, made of potatoes. He sat with us while we ate. Jon composed himself, and asked Orlando, “has Juan been by?”

“Juan was here recently, yes. He went through the back door of the shack into the Mapa Mundi, and I pray we meet again. Traveling that was is incredibly dangerous, but he felt it was his mission.” Jon nodded. Orlando looked like he was very far from us. “But tell me, with what can I help?”

“One of the Anywnites in Golgonozza got a message from Barbelith that said you could help us get Rex Tyler, find the lost princess, and solve the Myra and Tyler assassinations.”

Orlando laughed. “Is that all? They must have incredible confidence in me.”

“So you don’t have any information about those?” I blurted out, expecting to be shushed, but Orlando responded kindly.

“I know some, but how I can truly help you is different than merely telling you information. I must take you with me on a journey, and there you can discover everything you need.”

“What does that involve?” Jon asked.

“Have you ever taken peyote?”

We both shook our heads. Jon and I were military people; we smoked a little dope from time to time, and drank like fish, but weird drugs like that were way outside our wheelhouse.

Jon shrugged and looked at me. I paused; I was more curious than I was scared. What had my sanity ever done for me, anyway? “I’m game.”

Orlando grinned. “I am very glad you both have come to visit me.”