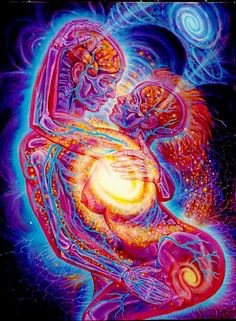 “Ouroburos. The snake that devours itself, the rings around the world. Saturn is like that, because he devours his own children. You’re like that, you’re always up your own ass.” She laughed, and he pursed his lips. They were looking through his CDs, and she’d pointed to the cover of his Tool album, Fear Inoculum.

“It’s just a band; I just like the singer’s voice and the drumming.” He felt criticized.

“I like mythology; I just see it everywhere. It’s probably the psychology I took in college. Or maybe I’m schizophrenic.” Trudy was on her third date with Tim, and this was the first time she’d seen his apartment. He had cooked her dinner, and now they were in that phase where Trudy always faltered. She knew that he probably wanted to sleep with her now, and she didn’t know what she wanted to do. She was walking around his apartment, picking up his objects, and remarking on them, trying to get him talking, trying to keep physical distance from him while she decided what she wanted to do.

“You think I’m always up my own ass? I thought you liked to talk about deep stuff.”

“No, no, it’s wonderful, how much you think about things and explore your thoughts. Really. Jung said that unconsciousness was the worst sin in the world, because you have all this material to work with in your life, but if you ignore it, it just dies with you.” She was ruining it. Did she want to ruin it? Now she was overthinking it. He’d infected her. Damnit. Sex had been so much easier on dates when she was drinking, but since she’d been sober, she had to try and figure out what to do, instead of letting her drunk take her wherever it wanted to.

Tim picked up the CD. “Do you know Tool? They have a lot of references to spiritual things in their work, like Pneuma, the breath, like how God breathed life into the world.” He looked at her hands, across the table, clasped, and he wanted to touch her. But she was so far away. Every time he tried to get closer, she shrank away. He wondered what he should do next. He needed to bridge the gap.

“I think I heard that one song they did back in the nineties. Can you dance to it? I like to dance.” Trudy was already standing up, carrying the CD to his stereo system. “How about ‘Pneuma?’”

Tim nodded. He didn’t usually dance to Tool, but he’d try. He watched her, hoping he could follow her lead enough to not humiliate himself.

Trudy started bobbing her head up and down, making the “rock and roll” sign with her fingers. She felt like a dork, like she was in high school trying to act cool. She took a breath and just committed to it. She counted in her head so she could get the beat.

Tim matched her, putting his feet down in the complementary pattern to hers. He reached his hand out to her, and she took the opposite; they trotted around in a circle to the beat. He started lip synching to the song, and Trudy laughed, pretending to do the same even though she didn’t know the words.

The CD player shuffled to ‘7empest.’ Tim drew her close to him, so their hips matched in opposite directions. He kept them in time to the music, and he used one hand to make a zig-zag pattern with their hips going back and forth. Trudy giggled, and after the fifth zig, she turned her hips around and started grinding on him.

Tim breathed in deeply; he was so relieved that she was responding to him. He smiled, and moved his hips along with hers. Was she twerking? God. He kept the beat up, and she turned around, kissing him, his nose nudging the glasses off her face.

Trudy took a step back and took off her glasses, putting them on top of the entertainment center. She kept her hips moving, like a belly dancer, making the finger cymbal motion when she heard the splash cymbal. She crossed her arms over her waist, and pulled her sweater over her head.

He reached out and smoothed his hands around her tight waist, across her naked shoulders and back. He kissed her again, and she pulled him toward her by his belt, deftly unlatching it. She lowered herself to her knees, taking his jeans down with her. She looked up at him, running her hands along his thighs and front, then lowered his boxers to release his erection. Trudy kissed gently around the base of the shaft, squeezing the head lightly as she drew his balls into her mouth, tonguing each of them. She sat back on her heels, and took his entire length deep into her throat.

Tim closed his eyes and enjoyed the warmth, feeling sunshine radiating up through his body. He stroked her hair, and said, “hey, I really like this, but can I do it to you, too?”

Trudy pulled off his cock, and stood. They moved over to the couch, and Tim got his shoes and pants off. “What did you have in mind?” Trudy asked, and he kissed her again.

“Oh, just the old ‘69,’ you know.” He sat her on the couch, and ran his hands down her bare legs. He moved up , under her skirt, and gently took off her panties. Then he laid down on the couch, and guided her mouth back to his cock, tonguing her clit from underneath as her pussy spread out before him.

She kissed and licked his velvety, throbbing cock, and brought her mouth and throat down onto it. Soon, they were moving in unison, him devouring her, she devouring him. She laughed to herself as she remembered the snake.