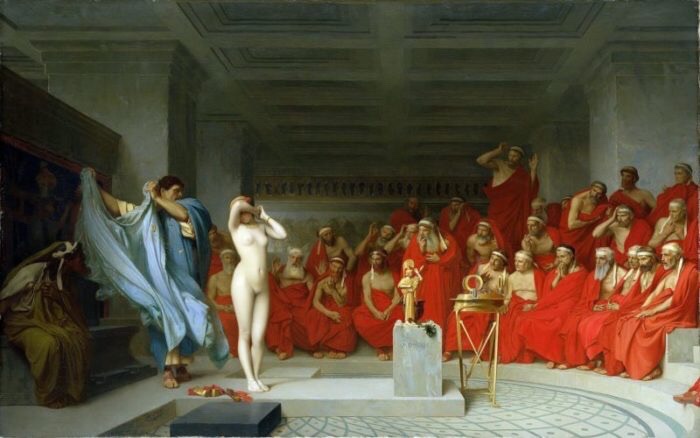 They crested the hill and a city stretched out before them. Shamshael stretched out his arms. “Welcome to your peoples’ home. This is the Unreal City, which we call Arcadia, bound by the river Leman. This where the world is restored.”

From their vantage point atop the hill, they could see the whole city laid out before them. Waters ringed the perimeter of a circular city, concentric circles. White and gold marble buildings were evenly spaced throughout each ring, with lush greenery and green grass dividing them. As they grew closer, the music of strings and laughter wafted up to them, and they saw that everywhere there were people, of all colors, in red robes like theirs.

Bruno and Lula smiled at each other. Lula reached out and put her hand on his shoulder. She asked, “before we enter the city, could we sit for a few minutes? I have to talk about something.” They slowed their pace, and sat down in the grass on the hillside, forming a ring around Lula, who had begun to cry.

“This is all so beautiful, and it’s what you all deserve, to be happy, to be loved, after everything that you’ve gone through. I don’t think I can do it. The closer we get to this beautiful place, the more I remember the hurt and shame and anger that I carry with me every day. I want to talk about it so I don’t run away.”

Zula reached out touched Lula’s hand. “We care for you and admire you, Lula. You have nothing to be ashamed of.”

“I have told both of you some of what happened with my father, but I want to tell you the whole story. My father … My father is one of Chester Camullus’ powers. He’s the minister of culture and religion. And …” Lula struggled for breath, to keep her voice. “He’s one of the Faceless Men. I’ve never told anyone that before. I was so scared that if I told anyone these things that they would get killed horribly.”

Bruno felt the light around him darken, like the black star was there, even in Arcadia.

“He would have me dress in these beautiful clothes, and I would be so scared. He would cover me in these musty filthy robes, and bring me through dark hallways, and I could barely see anything. I kept trying to see his face, but he was wearing a mask, and his face was blank. And he would lead me out into this room with so many people, I could hear their voices and their hideous chuckling. And … and …” She began to cry again.

Shamshael spoke. “Take your time, Lula.” His wings were folded around him, and Bruno marveled at how compact they became.

“He ripped off my coverings, and I stood on a stage amidst hundreds of Faceless Men. I started screaming, and I covered my face. I was wrapped in hands, like the wind, and carried up into the air, like I was held with ropes, even though there was nothing there. Voices were around me, taunting me, laughing at me. It was like every nightmare I’ve ever had.”

Lula closed her eyes and breathed. “My gorgeous clothes were slowly ripped to shreds. I was crying and screaming; my throat was burning. Then I was naked and there were invisible hands violating me everywhere, as I turned over and over in the air above those ghouls. The ghost fingers pushed in and prodded and I howled and there was no one to help me.”

“Then I was lowered to the ground and I collapsed. My father ascended the stage and gave a speech I couldn’t understand. I hid my head in my hands and shivered. He said, ‘Look, I made a vow to Urizen, and I said I would deliver to him whatever he required so that we could defeat those thieving greedy Aithinians, and I have honored my vow. My daughter has known no man, and Urizen wanted her, and now he has had her. I am Jordan Jubal, and I am the son of a whore. But today, I have erased that shame. We have won the war, and I have honored my vow, may Urizen bless us!’”

She put her palms to her eyes to try and stem her tears. “After everyone left, he came over and threw the robe over me. ‘Get up. We’re going home.’ And we never talked about it but I always stayed away from him, whenever I could. He never looked me in the eye again. I went to college, and I’m building a life for myself, and it’s still connected to my heart; I’m still bleeding, somewhere.” Zula put her arms around her and pressed her head to her chest.

Bruno was growing angrier as Lula told her story, and he started to sweat. He slowly realized that the heat was coming from Shamshael. The onyx angel’s red eyes were burning, and smoke began to seep from his mouth. The grass around him blackened.

Shamshael rose into the air, his wings extended around him, huge and black. Thunder sounded in the distance, though there wasn’t a cloud in the sky. Shamshael’s voice caused the air to ripple. “Lula, your tears will be quenched. We will melt mountains with their blood. Their homes will be desolate. Their cities will never be rebuilt. They will seek death, but it will flee from them. We will shatter them.”

Zula, Bruno, and Lula held their hands to their faces as the heat radiated off the angel. Then he rose up through the air, and was gone. Zula stood. “Well. I don’t know what he’s going to do. Shall we continue?”