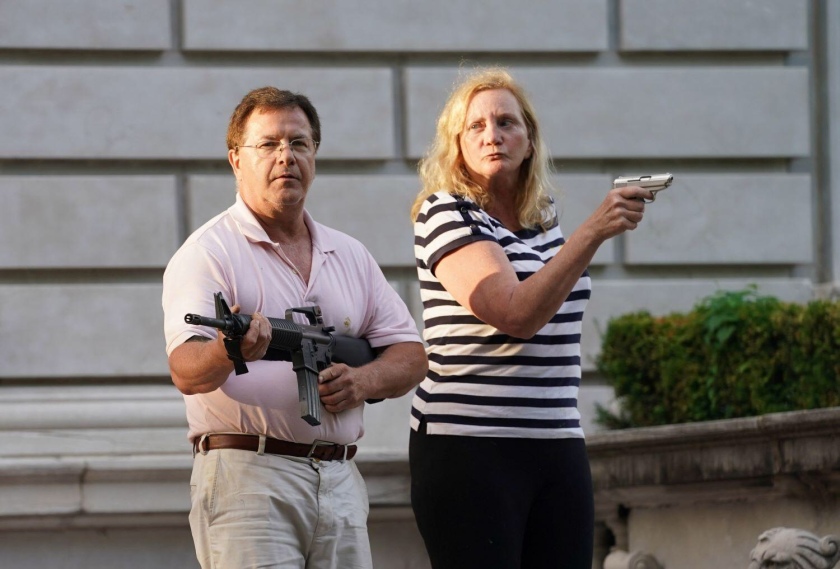 Last week, ten Black Lives Matter representatives in St. Louis, Missouri hand delivered letters to Mayor Lyda Krewson demanding that the police department be defunded. The mayor, in response, read the names and addresses of the letter writers on a Facebook Live broadcast:

“‘Here’s one that wants $50 million to go to Cure Violence, $75 million to go to affordable housing, $60 million to go to Health and Human Services and have zero go to the police,’ Krewson said, according to the report. ‘So that’s [REDACTED] who lives on [REDACTED] wants no police — no money going to police.’
According to the Riverfront Times, Krewson repeated this at least ten times during her broadcast, reading the contents of the letters and sharing the names and addresses of the individuals who provided them to her.”

This event is even darker when you consider that Krewson’s husband was shot in the neck and killed in his car in their driveway by a carjacker while she and her son and daughter were in the car. She is essentially saying, “Simon, you don’t like my politics?” It’d be a shame if someone came to 123 Evergreen Terrace and shot you, wouldn’t it? Bet you’d like the police now, wouldn’t you?”

You’ll see in the photos, she carries a handgun, he carries an assault rifle. A simple defense of one’s property from two or three people would only require the handgun. The McCloskey’s actions were more aggressive.

Then consider Mrs. McCloskey’s weapon handling. She points the gun at the demonstrators with her finger on the trigger. Safe weapon handling practices consider both to be forbidden, and require “trigger discipline.” She is unsafely wielding a deadly weapon as she would a pitchfork.

What am I getting at, here? The wealthy and middle class in the US are in a position like Dave Chappelle was when he had $25,000 in a backpack:

“I used to do shows for drug dealers that wanted to clean their money up. One time I did a real good set and these motherfuckers called me into the back room. They gave me $25,000 in cash. I jumped on the subway and started heading towards Brooklyn at one o’clock in the morning. Never been that terrified in my life. I’d never in my life had something that somebody else would want. I thought to myself, ‘Jesus Christ, if motherfuckers knew much money I had in this backpack, they’d kill me for it.’ Then I thought: ‘Holy shit, what if I had a pussy on me all the time? That’s what women are dealing with.’”

People in the US are afraid, afraid of each other, afraid of a virus and the retribution for the crimes of capitalism and a fascist government. And if the police are the one’s shooting you, and the President supports you getting shot in the street, why wouldn’t you fear for your life?

You could take Krewson’s story and realize how dark it is. A woman’s husband is murdered in front of her. Twenty years later, she becomes mayor, and in face of criticism for police brutality, she publicly invites killers to the homes of her political enemies, so they can receive the same violence her husband did. When protestors come to confront her, they risk being mowed down by machine gun fire. It’s like a shitty, suburban Game of Thrones character arc.

I’ll close with one of my favorite quotes, from Yeats. “And what rough beast, its hour come round at last, Slouches towards Bethlehem to be born?” This is to say, if this isn’t the Apocalypse, it sure as shit feels like it.